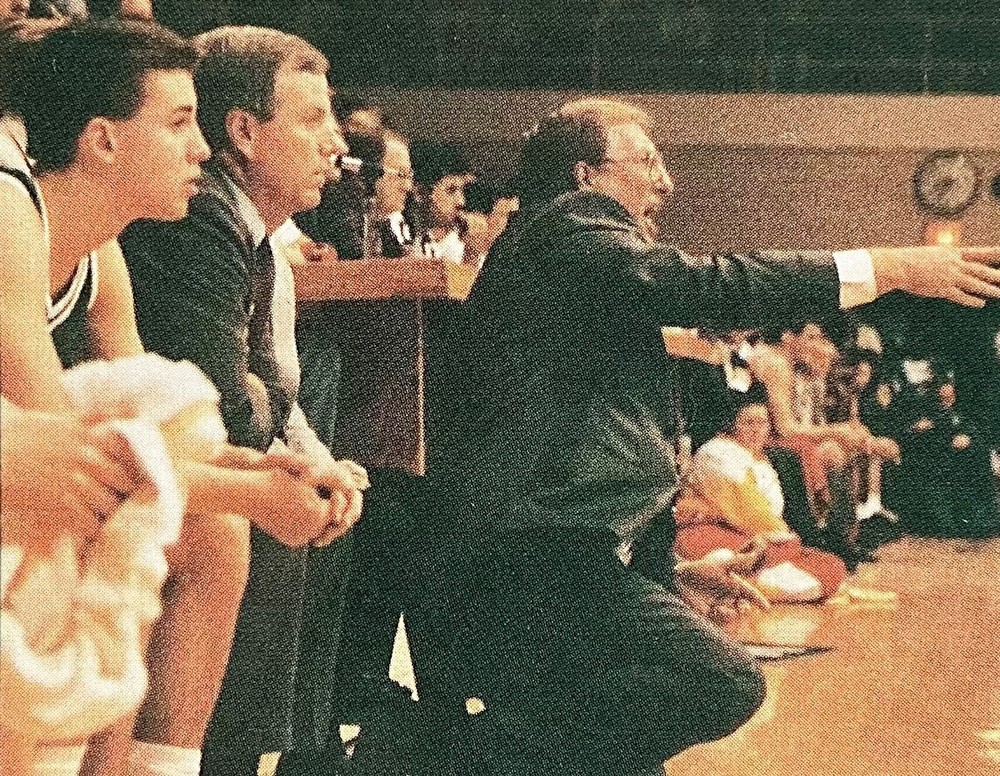 He and his team were on the bus heading to United Township’s Panther Den, where a sectional championship was on the line. The opponent for the third time that season was the Rock Island Rocks, with the teams splitting their first two contests.

Kiss suddenly felt a tap on his shoulder. It was Gary Harlacher, one of his assistant coaches.

Sure enough, a few hours later, with only 22 seconds remaining, Rock Island claimed its first lead of the game, 60-59. On the next possession, Geneseo guard Jason Ohlsen brought the ball down the floor, drove to his right and banked in a driving lay-up for a 61-59 lead with nine seconds left. The Maple Leafs made one final defensive stop and a massive celebration was underway.

“We spent about 15 minutes discussing it on the ride in and it’s amazing that very situation came up,” recalled Kiss. “Harlo was always thinking ahead.”

“He was such an integral part of Geneseo athletics for close to four decades,” stated Kiss, who also taught at the high school and knew Harlacher since the early 1980s. “If you look at his career and the number of sports he coached, he was an institution for the Maple Leafs.”

Kiss and Harlacher remained close over the years and regularly gathered for coffee with another pair of former Geneseo coaches, Denny Diericx and Dan Rogers. They’d talk about life—then and now—but the conversations always touched on one another’s family.

For Harlacher, that included two children, Ryan Harlacher of Los Angeles, Devon (Dan) Schaaf of Geneseo, and three grandchildren, Hayden, Reese and Connor Schaaf. Whereas in recent years he devoted much of his time to them, their lives and their events, it’s the impact he had on countless students and athletes since his arrival in Geneseo that will make him so missed throughout the community.

“You look back at everything and there was a common thread of simplicity, efficiency, effectiveness and uniqueness with Coach Harlacher,” said Kiss. “Those things ran together with all that he did. He loved to coach, but I think he enjoyed teaching just as much. He just liked people, and he was good with them. He was available to all segments of our student population and that’s why he had such a great impact.”

Brad Johnson, the leading scorer and rebounder of the 1993-94 team and a member of the 1996-97 Iowa State Cyclones team that reached the NCAA Tournament’s Sweet Sixteen, offered high praise for Harlacher.

“Gary was one of the best,” said Johnson of Harlacher, who served as the team’s offensive coordinator. “He was one of those guys who kept in touch. He was always interested in hearing about what I was doing long after I graduated. He was someone I could depend on.”

After defeating Rock Island for the sectional championship in 1994, Geneseo faced Rockford Boylan with a visit to the state tournament on the line. The Maple Leafs came up short, however, and a historical season came to an end.

Moments after the final buzzer, Johnson dropped to his knees in a moment of overwhelming disappointment and disbelief. Harlacher immediately gravitated towards the star forward as a show of support.

“Coach Harlacher knew how we felt in that moment,” Johnson recalled. “He was hurting, too. He understood what I was going through and he was the first guy to come over. I appreciated that and it was indicative of who he was as a coach and a person.

“He was always there for us and never got too high or too low,” added Johnson. “No matter how loud it got it the gym, you could always hear him hollering. He was always an encouraging, motivating voice for our team.”

In 2008, Harlacher assisted Brad Storm as the boys’ team again reached the IHSA Sweet Sixteen. He was then selected by his peers and inducted into the Illinois Basketball Coaches Association Hall of Fame in 2013 along with Kiss.

“He was very deserving of that honor,” stated Kiss. “Coach Harlacher had a deep sense of pride. It was very important for him to be a teacher and very important for him to be a coach. He put all his resources into making sure the people that he dealt with got his best effort. That’s what allowed him to bring out the best in those who were around him.”

“Gary was one of our biggest fans,” said Johnson. “He was always there for us. I always enjoyed chatting with him when we crossed paths over the years. It was like no time had passed. I will miss him, and I know countless others will too.”