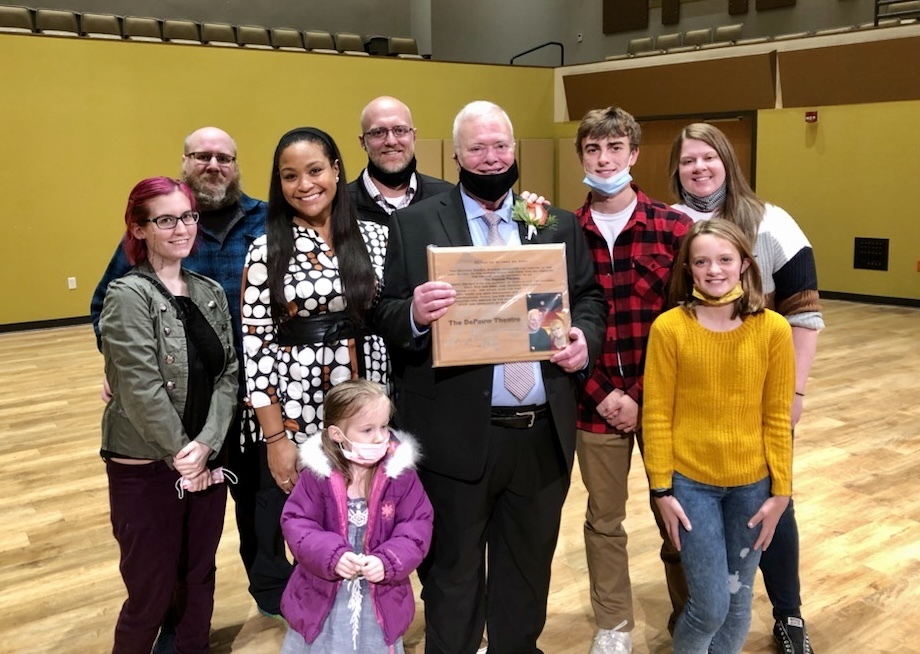 When Geneseo High School theatre students prepared to perform a portion of Arthur Miller’s “All My Sons” several years ago, director Joe DePauw knew the group was capable of something special.

The play was heavy and dramatic, and as they readied it for competition, parents were invited for a showing. Several minutes after the play had concluded, most had left their seats and made their way outside. A few, however, remained.

“I approached them and asked if they were OK,” DePauw recalled. “They were crying and so emotional, saying they couldn’t believe what they just saw. That was a special moment for me.”

Many others have enjoyed their moments over the years thanks to DePauw, who has been an integral leader for the Geneseo theatre scene for nearly 43 years—and counting.

On Oct. 30, he and his family were honored by the Geneseo School District when the high school’s theatre was formally named the DePauw Theatre.

DePauw began his teaching career in Geneseo in January of 1978, and he directed his first play at the high school, “The Haunted Honeymoon,” during the 1979-80 school year. While he started out and worked in special education until 1996, he served in other roles as well, including vocational director, dean of students and assistant principal.

His passion for the theatre was an unwavering constant, with DePauw directing between one and four shows per year, a combination of the fall play, spring musical, winter play and contest play.

Though DePauw retired in 2011, he continues to direct the fall play and spring musical and serves as the local liaison for the McKinney-Vento Homeless Assistance Act, which provides assistance for struggling families.

“I’ve spent my entire professional career in this community,” said DePauw. “I’ve worn a lot of hats and thoroughly enjoyed them all.”

It always seems to come back to theatre for DePauw, though, and when he learned a group of former students had written a letter to petition for the dedication, he was overwhelmed with gratitude.

“I’ve always said that our theatre kids are the greatest kids,” explains DePauw. “When you work with kids, sometimes you don’t know the impact you have on them. Sometimes it takes something like this, and when I think about seeing the nomination letter for the first time, I couldn’t believe it.”

DePauw is quick to mention that none of his success would have been possible without the support of his family, particularly his late wife Marilyn, who for decades served as his “sounding board,” and his children, Alex, Ben and Abby, who along with their children were on hand for the dedication.

“It meant a lot to have the whole family by my side,” acknowledges DePauw. “It’s the DePauw Theatre, so it’s all of us. Marilyn, I’m sure, is looking down happy and excited, and for the kids and grandchildren to be a part of it too made it special.”

Travis Mackey, the high school’s principal and formerly the athletic director, the latter a role in which he regularly worked with DePauw, introduced him and spoke about how DePauw’s mastery of the content, ability to motivate and genuine care for people makes him so effective and impactful.

“You look at what it takes to bring out the best in people and it starts with how well someone knows their content,” says Mackey of DePauw. “Joe knows what it takes and he’s incredibly skilled in teaching young people. He is a great motivator, and he does it in a way that’s not threatening—he believes in faith over fear. The other piece is that he shows students that he cares about them. When you do that, people gravitate to you, and they certainly gravitate towards Joe.”

As for what’s next for DePauw, he plans to keep directing. After all, if you ask him which play or musical has been his favorite, he’ll tell you it’s the one he’s currently working on.

“I’ll remain active as long as they’ll let me,” says DePauw. “I really enjoy it and we’re always looking forward to the next show.”