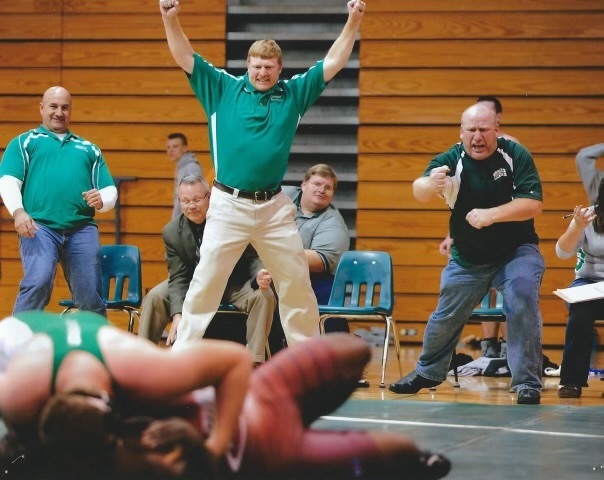 Murray a model of sustained success and longevity

Twice in fact, once after his freshman year of high school and another after serving as an assistant coach for Larry Kanke from 1992 to 1999.

When Murray returned in 2001 to teach and take over as the program’s head coach, however, he had a feeling he might be here to stay.

“The more I see other communities, the more I see how good we have it in Geneseo,” explains Murray. “The community is so supportive, from the parents to our administration. That’s meant so much, because obviously you can’t do it by yourself.

“There’s an old saying that I think about, ‘They will not care how much you know until they know how much you care.’ I try to remember that and live by it,” Murray says of his approach.

“Ever since I came back,” Murray adds, “I’ve had the peace of mind that I’m in the right place. I’m so appreciative of that and grateful for the situation I’m in.”

It’s Geneseo’s wrestlers who have benefited the most thanks to Murray’s prolonged presence. Last May, he recorded his 300th coaching win and recently, he was awarded with a Maple Leaf Medallion, the district’s highest honor.

“As the head coach, you tend to get credit when you win and good things are happening, but so many people contribute and help you look good,” states Murray, who also serves as the girls’ golf coach. “Between the parents, the boosters and others throughout the community, we not only have the support, but we have nice facilities and all the equipment we need. Not every district can say that.”

After his family moved from Geneseo his freshman year, Murray lived in Danville his sophomore year and finished high school in Bloomington. He wrestled collegiately at Illinois State University and Illinois College, and following graduation, was determined to find work as a teacher and coach.

He’s accomplished both in Geneseo, having taught physical education, health and driver education while coaching soccer, cross country, and track and field over the years in addition to wrestling and golf.

While he had big shoes to fill in replacing Kanke, a member of the Illinois Wrestling Coaches and Officials Association’s Hall of Fame, he’s done just that, and it starts with a simple day-to-day approach.

“I’ve always tried to keep the relationships first, whether that’s with parents, the team or our administration,” explains Murray. “Positive and trusting relationships are so important—then you can work on teaching in the classroom or taking care of business in the gym. There’s an old saying that I think about: ‘They will not care how much you know until they know how much you care.’ I try to remember that and live by it.”

Surprisingly, the significance of his 300th win was at first lost on Murray, who is more inclined to think about the next meet than get caught up in any given moment. Appropriately, it was the community he loves that ensured he received his well-deserved recognition.

“What made it so meaningful to me is how everyone reacted to it,” recalls Murray. “The parents and fans had signs and made a big deal out of it, and that touched me. To me, 300 was just a number. I like to keep going and look ahead, and I didn’t really think too much about 300 until everyone else did. Then it hit me, and to see that it was important to others made it important to me.”

“If we can gel together, stay healthy, be full strength at the right time, and get a good draw, and this is a team that could potentially bring home another state trophy,” Murray says of this year’s group.

This year’s wrestling team is off to another impressive start with an 8-2 record and the 6th spot in the Illinois Wrestling Coaches and Officials Association’s class 2A rankings. Murray’s group won the Rockford East Tournament, a field of 20 teams, and finished fifth amongst 24 teams—most of them from class 3A—at Hinsdale Central.

Three individuals are currently ranked by the IWCOA in their respective weight classes—Zachary Montez (no. 2), Anthony Montez (no. 2) and Tim Stohl (no. 6)—while Carson Raya, Jack Snyder, Josh Hock, Harrison Neumann and Levi Neumann all received honorable mention.

“If we can gel together, stay healthy, be full strength at the right time, and get a good draw, this is a team that could potentially bring home another state trophy,” states Murray.

As more team and individual accolades are earned, Murray has learned over the years to stop and enjoy the moment.

“When our team finished second at state in 2013,” recalls Murray, “it was great, but I immediately started thinking about what we could do to get better for next year. Once we got home, though, the school hosted a big assembly for us, and the emotions kicked in.

“It made me realize it was a big deal for our wrestlers, their families and our supporters,” Murray continues. “It’s also a reminder of how grateful I am for the Geneseo community and why this is such a special place to live.”